While road runners refocus their energies on the virtual ”Race the Comrades Legends” run this weekend, eager athlete Alan Hardaker has recruited an extended family team to run in the colours of The Cows to raise money for the CHOC Childhood Cancer Foundation of South Africa.

400 runners will don the black-and-white kit of The Cows on Sunday for the virtual relay on Sunday, several of them from overseas. Some will be running the full 90km while others cover smaller distances in relay teams.

Hardaker made headlines last month when he channelled his disappointment at not being able to run his first Two Oceans Marathon into running 58km in his garden in Sandbaai, and in the process raising over R20 000 for CHOC. 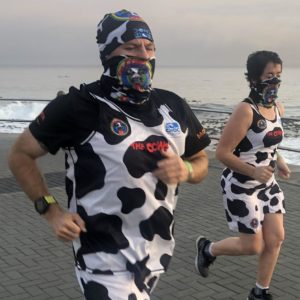 When The Cows committed to backing the Virtual Comrades they arranged a Rad Cow Relay to be held as part of the virtual run to make sure they maintain their support for CHOC around the Comrades, and eager road runner Hardaker decided to make the most of the opportunity.

“I’m doing the 90 km virtual Comrades in Sandbaai and my route will be street art through Vermont, Onrus, Sandbaai and then if I have clocked the 90km finishing off in Hermanus itself,” said Hardaker.

He added that he had roped in this extended family to form a team for The Cows Rad Cow Relay, calling themselves The Flying Cows.

“I’ve also got the buy-in of my fiancé Magriet Van Zyl, who will be running the 21km virtual race and she will also be the team captain of the Flying Cows, which will include Jan Louw, Nicky van der Linde, Paul van der Linde, who is 11 years old, and Dewet Luttig,” he explained.

“CHOC is a charity which is close to my heart due to having lost my mother to lung cancer and my fiancé having gone through the ordeal of being diagnosed with breast cancer within a week of us being engaged. I really felt a connection with CHOC and their efforts in providing support to children suffering from cancer and their families.

“After my Two Oceans run, which was done in 500 laps of my garden in Sandbaai, I really had to get myself into the best possible shape healthwise,” says Hardaker. “I am diabetic and I had a heart attack in 2016 where I needed to have four stents inserted to open up my arteries.

“Reading more and more about how the coronavirus affects people with underlying health conditions drove me to keep my training focussed and eating under control. When the subs opened up for Comrades I got myself an entry knowing at the back of my mind that the race would be cancelled but also knowing that I needed a specific goal to work towards.

“I got a lot of inspiration and encouragement online from other runners who are seasoned Comrades runners, and the friendships, advice and positive attitudes of many on the Facebook group really makes you realise just how great people are and how much of an encouragement they can be in times of need.

“In part our run on Sunday is going to be showing our thanks for this support. I am really looking forward to the opportunity of running the actual Comrades Marathon as soon as the opportunity arises!” he added.

“My training rubbed off on my fiancé Magriet and she started training to run the Knysna Half Marathon in July, when this was cancelled and Comrades were offering the option of a 21km Race The Legends she jumped on board with the idea of getting a few friends along for The Cows Rad Cow 90km relay.

The link for the Givengain site https://www.givengain.com/ap/alan-hardaker-raising-funds-for-the-cows/.