While the road running community ponders the Two Ocean Marathon that has been cancelled, one determined runners is planning to run the race at home on Saturday 11 April to fulfil his desire to raise money for the CHOC Childhood Cancer Foundation of South Africa.

Alan Hardaker was due to run his first full Two Oceans Marathon, but like every other runner he has accepted the cancellation of the race due to the coronavirus lockdown.

He was just as excited to take on the marathon for the CHOC children, having had first hand experience of the impact on cancer on his family, so he was determined to resort to a viable Plan B, albeit a much tougher option. 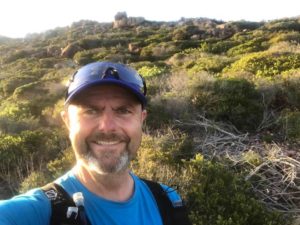 Hardaker will run the same 58km distance, but on a 150 metre lap around his parents-in-laws property in Sandbaai, and has completed a number of preparation runs on the sandy track around their property.

“It is going to be quite some challenge as it comprises of a bit of sandy uneven sections, a nice little hill which will see me do almost the same elevation as the actual route,” said the 46 year old runner and financial advisor.

at the same time athletes locked down in their homes will be part of The Cows 12 Hours Lockdown Challenge, which requires then to do 30 minutes of exercise and make a R30 donation to the CHOC GivenGain account.

To make a contributions to Alan Hardaker’s run on Two Oceans day go to https://www.givengain.com/ap/alan-hardaker-raising-funds-for-the-cows/