Highway father and son set to tackle Amashova for CHOC

In amongst the thousands of cyclists taking part in the Tsogo Sun Amashova Durban Classic on Sunday will be a unique father-and-son combination of Andy and Luke Morgan riding a tandem in the colours of the Cows, taking on the 65 kilometre race to raise money and awareness for the CHOC Childhood Cancer Foundation.

It will be Luke’s first major cycle event and completes his dream to challenge himself at a tough sporting event and at the same time make a meaningful contribution to a cause close to his heart.

Luke, who will be one of the youngest riders in the field, lost a close school friend to cancer at the age of six and has a strong connection to the CHOC charity that aims to help children being treated for cancer by housing them with their families in one of the CHOC houses around the country. 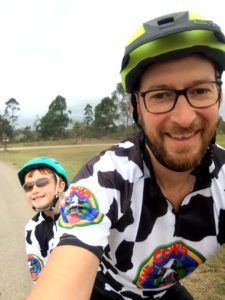 “He is so excited for the Amashova on Sunday,” said proud dad Andy, who is an English master at Kearsney College.

“He said he’d like to ride because he knows lots of kids can’t,” explained Andy Morgan.

Since word got out that the dad-and-son duo intended to ride the Amashova for CHOC in the black and white livery of The Cows, friends, family members and school parents have rallied around them, to their surprise.

“I was set a target of R8000 to raise,” explained Morgan. “That’s an appreciable amount of money. So I started with appeals on various networks and WhatsApp groups, and the response has been overwhelming.

“We already have R13 500 in our GivenGain account and there are still others expressing an interest to add to that,” he said.

The GivenGain account has been named “Little Red Riding 4 Good” after red-head Luke and his ground-breaking quest to ride for the CHOC charity on Sunday.

The pair will be riding a tandem loaned to them by staunch Cow Gordon Reid, who will be a making a statement of his own by riding the race in a hand-cycle.

Anyone keen to contribute to the father-and-son’s fundraising efforts can make a donation at https://www.givengain.com/ap/little-red-riding-4-good-raising-funds-for-the-cows/.