July proved to be a life-changing month for a group of eight boys from Kearsney College, one of their staff members and three parents as they summited Mount Kilimanjaro, and proudly hoisted a banner dedicating their climb to the CHOC Childhood Cancer Foundation of South Africa.

The boys started their measured ascent on a wintery Wednesday, 3 July and they all reached the Uhuru summit on Monday 8 July, an experience that the five Grade 11 and three Grade 12 boys, Luke Dudley, Neels Volschenk, Jared Uys, Wesley Uys, James Mackenzie, Luke Wilson, Nico Willemse and Jordyn Scrooby, say has left an indelible mark on each of them. 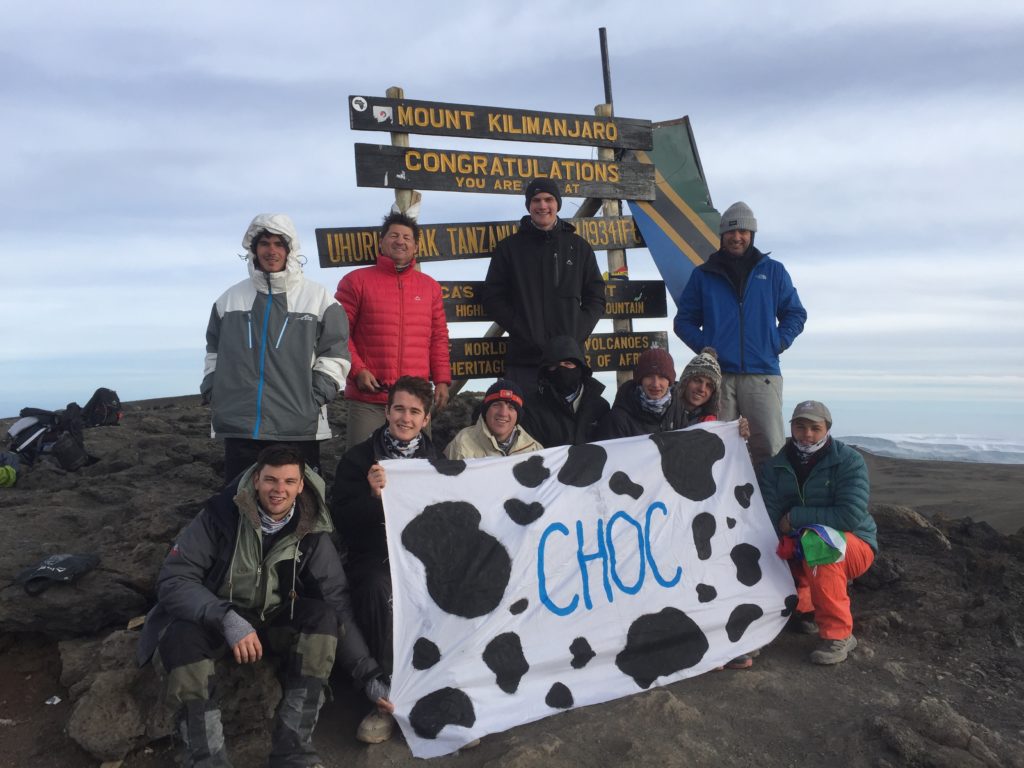 “It was a last minute decision to dedicate the expedition to the CHOC Cows,” explained Andrew Mackenzie, one of three fathers along with Greg Uys and Penny Dudley who joined teacher Kyle Eysele on the expedition.

“Speak to every boy and they will all say this was way harder than they dreamed about, physically, but more mentally. For the boys, it was without doubt the greatest and hardest thing they had ever experienced and achieved in their lives,” he explained.

“At the summit, tears were flowing uncontrollably amongst a lot of us as the realization of what we had achieved sank in. The reality and enormity of the event hit us hard. It was truly a wonderful moment to experience the raw beauty of the mountain and the physical challenge with the boys and all involved,” said Mackenzie.

The group had to temper their enthusiasm with the advice that the ascent needed to be undertaken cautiously.

“Although not necessarily long distance days, cumulatively the hiking and altitude added up, more so than what everyone was expecting,” said Mackenzie.

“The hike up to the summit started at 11.30pm and although we had been warned about the difficulty, cold and tiredness of the walk, we took off in good spirits, singing our way up. Reality started kicking in at about 3am. We had already been walking and climbing straight up for four hours or so and the temperature had dropped to about -7 degrees.

“From that point, all of us realized that this was going to be way tougher than we had anticipated and we were only half way up the summit. From there, it literally felt like a fight for survival. Silence erupted and the focus became the person in front as you continued to trudge up,” he said.

“Sunrise improved spirits but also showed us what still lay ahead. The last hour felt like an eternity. We probably only walked half a kilometre and climbed about 200 metres, but the altitude was starting to play havoc. 5900m is high and no-one in our group had experienced such altitude. It was an effort just to walk and stay upright.

“Most of us really struggled over the last hour or so and a couple of our group had to be helped and carried to the top and back down. This is where we realized why we had to take it easy in the first few days.

“It was great to see the boys having to dig deep and it was never a competition to see who would make it first, but rather a battle to ensure everyone made it. There were literally bodies and hikers split all over the last few hundred meters as the altitude took its toll.

He added that the group had been in awe of their guides. “Hopefully we all learned from their humbleness and that we will all remember how far kind service with a smile can go in any environment,” said Mackenzie.