The Cows stampede to victory at Comrades Marathon

As the dust settles on the 20 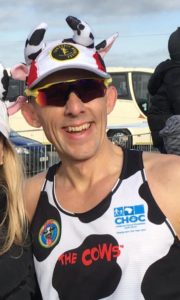 19 Comrades Marathon, The Cows are celebrating their successful ‘stampede’ that saw them finish as the top charity fundraiser, with their stalwart Axel Rittershaus topping their list of individual fundraisers.

The Cows take part in a variety of sporting events to raise money and awareness for the CHOC Childhood Cancer Foundation of South Africa, and through their combined efforts at the 2019 Comrades they raised over R1,6 million.

Capetonian Rittershaus in his personal capacity raised R82 314 to help The Cows easily win the race for the top charity fundraiser at this year’s Comrades, where just over R4 million was raised for the seven official race charities.

The event saw 156 runners turning out in the black-and-white livery of The Cows, each raising funds and adding the feisty Cow stamp to the 87 kilometre race between Durban and Pietermaritzburg.

The success of the race for The Cows might initially be measured by the huge amounts raised, but as their national co-ordinator Daisy points out, there are many heart-warming personal milestones achieved in their Herd. 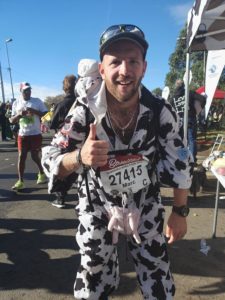 Nelspruit-based Cow Marc Bainbridge ran the entire race in the furry Cow suit, no mean feat for a runner attempting the race for the first time.

Bainbridge also teamed up with fellow Cow Gregory Kendall to carry a struggling Jeppe runner to make it to the finish line in Pietermaritzburg.

For Caz Clover of Hilton the small Comrades medal was a significant achievement as she reached a goal she set herself after a tough battle against cervical cancer.

Cordi Van Niekerk, who was one of The Cows that founded the movement over a decade ago at the 947 Cycle Challenge also completed his maiden Comrades Marathon.

Another passionate Cow Daryn Woods made the trip from Australia to complete the up-run in the colours of the Cows for a second time.

“Every single person who put their hand up for CHOC by opting to run for The Cows is a winner to us,” said Daisy.

“We ran two watering tables on the route as well where the Cows were as noisy and energetic as ever, and really helped to get all the runners through to each of those important small personal milestones that each one sets for themselves in the race,” Daisy added.

Jayde Fouché , who is the current Daisy of The Cows, was remarkable in that she ran the up-run just days after completing the Durban Iron-Man event, and had to push through a brutal final ten kilometres when her legs conceded to the back-to-back ultra-events.