The trio were part of a group of five swimmers, Chris and Polly Stapley, Jay and Ruth Azran and Australian Andrew Stevens who flew into Lilongwe intent on swimming from Makanjila Point to Senga Bay. Lake Malawi is the fourth largest fresh water lake in the world by volume, the ninth largest lake in the world by area and the third largest and second deepest lake in Africa.
As they left on the 25th April after having camped the night prior on a sand bank by the start point the experienced support crew stated that the weather and water were the worst conditions they had encountered for a crossing to date. 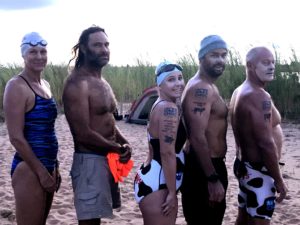 “’The wind was blowing with purpose from the South East with the weather forecast predicting this to settle down after midday,” recalled Jay Azran. “The surface of the lake felt like a washing machine as we all battled the troughs and crests of the waves for over six hours.”

“I felt sorry for the first swim group as they had close to an extra hour of these conditions, but we had to take the gap as the forecast predicted the weather to get worse over the coming days.”

The plan was for the second group to pass the first group of slower swimmers but due to the conditions, they passed 500 metres to the south of them. Despite the winds Chris Stapley and Jay Azran seemed to be close to a record time for the first 21 kilometres of the crossing.

Then they swam into strong currents swirling all directions around an island South of the point at Senga Bay called Namalenje Island which threw serious doubts into the swimmer’s minds as to whether they were going to finish.

‘’At one point we were swimming next to each other’’ Chris Stapley said. ‘’Then suddenly Jay was a few hundred metres ahead as he managed to get through the current. I changed direction swimming at forty five degrees across the current and managed to catch up with Jay who seemed to be stuck in another off-shore current. The last four kilometres took us close to two hours.”

The two men finally reached the rocky outcrop next to Senga Bay in a time of 8hr 40min having swum a distance of 25,3km.

The group of three slower simmers behind them had to battle through the worst of the conditions, with mixed results. The safety crew eventually withdrew Polly Stapley, who had become violently sick due to seasickness in the challenging conditions. She wanted to persevere but the decision to withdraw was based on concerns of dehydration and the lack of nearby medical facilities.

64 year old Andrew Stevens continued to battle his way through with limited feed stops to complete the crossing in 10hr 50 min, followed by the gutsy Ruth Azran, who completed the crossing in 11hr 08 min, despite injuring her shoulder, and said that she was continually motivated to inspire her own children.

The swimmers followed English Channel rules with no touching of the support boat during their feed stops, and between them they set four new records.

The exhausted swimmers extended their thanks to Walter Muggleton who was both skipper and navigator, skipper Aubrey De Klerk and his wife Nita and their staff from Chembe Eagles Nest who helped with many of the logistics on the ground.