Some way behind the galaxy of international star mountain bikers at the Absa Cape Epic that starts on Sunday, will be a team of two brave athletes who have agreed to ride the gruelling eight day event in furry Cow suits to raise money for the CHOC Childhood Cancer Foundation.

Port Elizabeth-based Wayne Keet will team up with Gauteng rider Warwick van Breda for the 700km ride, aiming to catapult the CHOC cause into the limelight by being one of the top fundraisers at this year’s event. 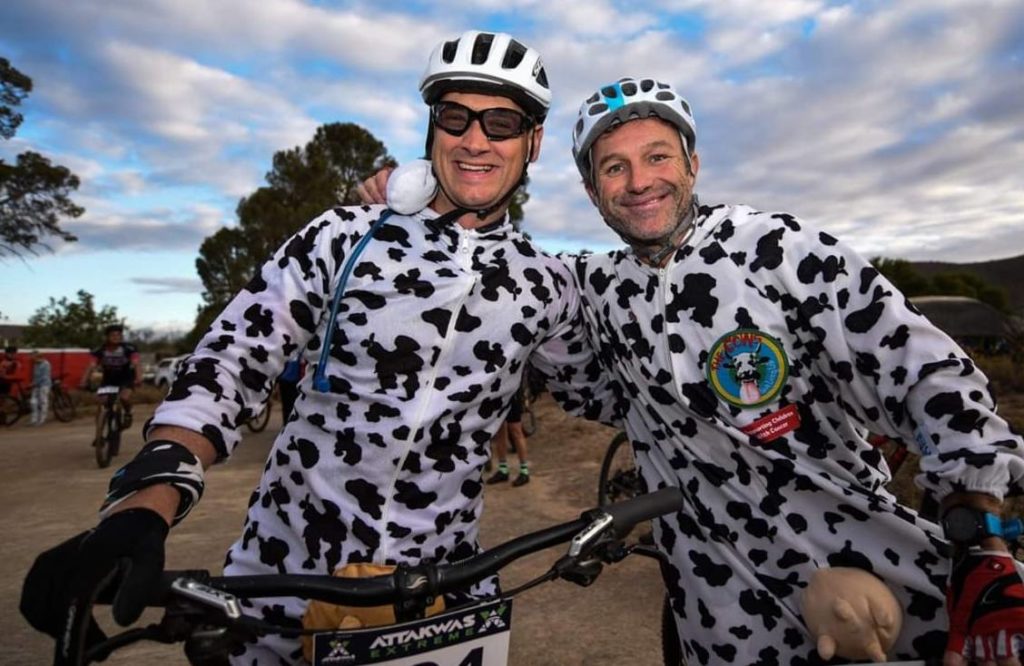 The pair of die-hard athletes have already racked up over R80 000 in donations and pledges through their GivenGain account and are hoping to try and reach R150 000 by the time they ride into the race finish at Val De Vie outside Paarl.

Both are veterans of the ten year old Cows organisation and have taken part in many ultra-distance events, from the 947 Cycle Challenge to the Iron Man and the Comrades in the black and white livery of The Cows. This event however sees them targeting their fundraising more specifically.

“We want to raise money specifically for CHOC in Port Elizabeth and the Eastern Cape,” said van Breda.

“Wayne is from PE and I spend time there around the Iron Man and we are both acutely aware that raising money in PE is a lot harder than approaching corporates in Joburg, Durban or Cape Town,” he said.

“We are really pushing the fundraiser so that we can make a big difference in trying to help set up a CHOC house in PE to house kids and their families while they are being treated for cancer,” he added.

The idea came from Keet after he had run the Comrades with a few other fellow Cows in the distinctive black and white onesie suits.

With temperatures in the Western Cape often rocketing above forty degrees, the pair know they are in for a tough eight days in their furry suits.

“It is going to be a big ride, for sure,” said van Breda. “I think it will mostly be a head game though.

“We did the Attakwas recently in the Cow suits so we know we can do it. I am not worried about the watt output or the fitness or technical side of it. The heat will make it interesting, but so worthwhile.”

Anyone keen to support the Epic Cows can make a donation via https://www.givengain.com/ap/theepiccows4choc/