Flying Cows take off with Tailifts 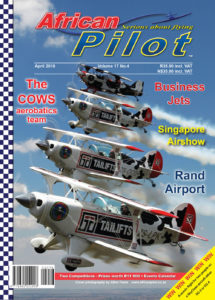 The Pitts Special formation aerobatic team, led by SA aviation legend Scully Levin, first took to the skies 32 years ago, and has been a highlight at airshows across the country ever since.

Their new sponsor and paint scheme is sure to catch attention. The compact, nimble Pitts Special biplane is a classic aerobatic aircraft, yet despite being a 50 year old design holds its own and remains a favourite on the airshow lineup.

The fourship Pitts Special team of Scully and Ellis Levin, Arnie Meneghelli and Sean Thackwray flies energetic precision formation aerobatics to perfection. It’s this evergreen appeal, combined with precision flying that attracts the much needed sponsors. Tailifts has come on board as the team’s latest sponsor, but in addition to promoting the company, they are using the partnership for a far more philanthropic purpose. 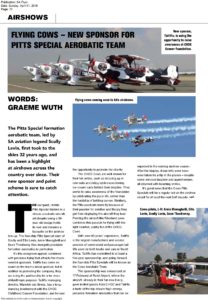 Tailifts managing director, Warwick van Breda, has a longstanding involvement with the CHOC Childhood Cancer Foundation, and he saw Flying Cows coming soon to SA’s airshows. The CHOC Cows are well known for their fun antics, such as dressing up in cow suits and riding cycle races towing icecream carts behind their bicycles. They prefer to raise awareness of the foundation by celebrating the joy in life, rather than the hardship of battling cancer. Similarly, the Pitts aerobatic team fly because of their passion for aviation and the joy they get from displaying the aircraft they love.

Painting the aircraft like Friesland cows combines this passion for flying with the lighthearted, quirky fun of the CHOC Cows. With over 40 years’ experience, Tailifts is the largest manufacturer and service provider of commercial and passenger tail lifts used on both trucks and cars in South Africa. Tailifts has committed to at least a five year sponsorship, and going forward the fourship Pitts Specials will be known as the Cows Aerobatic Team.

The sponsorship was announced on 17 February at Rand Airport, where the aircraft, already in their fun new livery, gave invited guests from CHOC and Tailifts a taste of the top drawer high energy precision formation aerobatics that can be expected in the coming airshow season. After the display, those who were keen were taken for a flip in the planes — despite some nervous laughter and apprehension, all returned with beaming smiles.

It’s great news that the Cows Pitts Specials will be a regular act on the airshow circuit for at least the next half decade.