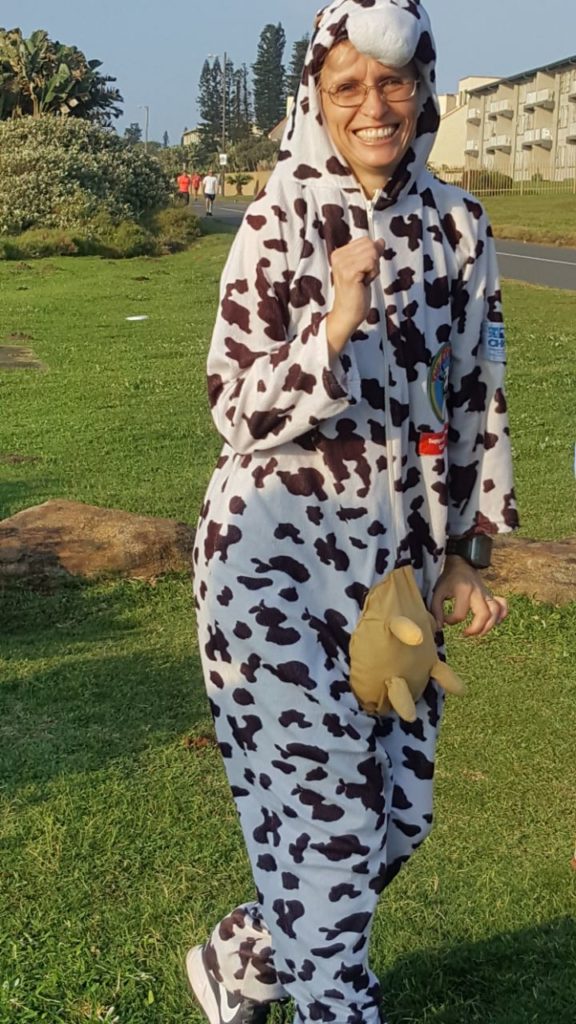 With 20 000 runners gearing up for the 2018 Comrades Marathon on 10 June, remarkable South Coast runner Deborah Berridge will be aiming to make the most of her tenth Comrades to raise money for the CHOC Childhood Cancer Foundation by running in the colours of The Cows.

After moving down to the KZN South Coast she started her running career cautiously, but soon progressed to the point of being able to take on and complete her first Comrades with South Coast Striders in 2009.

Totally bitten by the long distance running bug, Berridge used her new found passion for running to organise a series of local fun runs to allow her to raise money for a number of local charities.

Excited by the prospect of earning her green permanent number for finishing her tenth Comrades, Berridge is going all out to try and reach a goal set by her club captain Mark Smith to raise R10 000 on her own to commemorate her tenth Comrades medal.

Income from her fun runs, like her recent successful run on Easter Monday, and raffles have started to add up and local sponsors have helped make her dream a reachable reality.

In addition to running for The Cows and their year-round support of the CHOC Childhood Cancer Foundation, Berridge will also be running to celebrate the victory over cancer of a school colleague Dean Ducroq who won his battle with leukaemia.

“In Standard Two we were all told he would be wearing a wig and we were not to tease him or try to take it off,” she recalls.

“I remember in Standard Eight he was away from school a lot as he was receiving treatment. He finished his matric by correspondence.”

She reconnected with him recently after a search on Facebook and found he was living on the East Rand.

“I asked Dean to come to our 30th reunion and bring something of his I could pin on my running kit,” says Berridge.

“I will be running 2018 Comrades in honour of him surviving cancer as a child. He said I could use his CHOC patient number 551114. I will write this on my race number or onto my leg with a marker.”|

“I also got two bling D’s that I will tie onto the laces. I also found a small bell. It is not as big or noisy as a cow bell, but it will make a statement,” said Berridge.

The Shelley Beach runner was the last of a family of Gauteng runners to take on the Comrades, and made her debut in 2009.

“I kept my training a secret from my family,” recalls Berridge. “I only told my brother and sister in January, but I did not tell my other sister or my mother.

“My mom came down from Roodepoort by bus to spend a week with me before Comrades, when she got to my house I showed her my entry for Comrades. She thought it was something I typed up and was joking with her. We then told my older sister,” she remembers.

“Mom was soon on the phone letting her friends know she had three children running Comrades that year!”

She became friends with blind runner Judy Smith, who had been looking for a fellow runner to act as her guide for training runs and races; now the pair run together three to four times a week.

“She has a stocking that has a slip knot on one end,” explains Berridge. “It’s a lot like steering a horse. I use the cord to push or sometimes I pull.”

Not wanting to let her running partner down, Berridge trained even harder to make sure she could keep up with Smith.

“I ran many a training run behind her just trying to keep up,” says Berridge.

“I had to make sure I was fitter and faster than her, as her one worry was that her guide could not take her to the end of a race,” she added.