The swimming herd of The Cows splashed its way to a swathe of new records at the recent aQuellé Midmar Mile, raising over R650 000 for the CHOC Childhood Cancer project through the support of a number of schools and swimmers.

A total of 402 men and women swam in the kit of The Cows, making the grouping the biggest charity fundraiser at the Midmar Mile, a massive growth from the 35 swimmers that represented The Cows in the same event in 2014.

“We were overwhelmed by the number of swimmers that rallied to support CHOC by swimming for the Cows, especially from the schools, not only in KwaZulu-Natal, but around the country,” said Iris Varty, who as the main organiser is dubbed ‘Durban Daisy’.

“The girls from Holy Rosary School in Gauteng were fantastic again this year, but we were delighted to get a number of other local schools involved,” said Varty. “St Mary’s in Pretoria sent 26 pupils to swim with their headmistress.

“We also had wonderful support from Reddam House in Umhlanga, Maris Stella, Northlands Primary and the awesome girls from Ridge Park College,” she added.

She added that dozens of schools boys and girls had also swam for The Cows, under the umbrella of the Midmoo Nutella team.

Several prominent corporates had staff teams taking part in the black-and-white Cow kit, including Makro staffers from around the country.

Over 30 swimmers completed the tough Eight Miler challenge, raising money directly for the CHOC Pietermaritzburg operation, but Varty said she had been bowled over by the commitment of Jayde Fouché who swam for the CHOC Cows.

“Jayde not only did the eight Miles, but she did them back-to-back, running back to the start after each Mile,” said Varty.

Fouché said that she had been forced to run faster than she expected to be able to make the start of the next race. 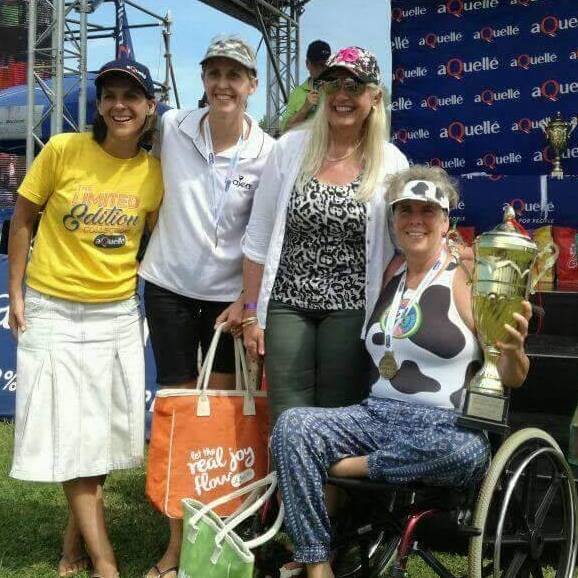 “With every stroke and stride I knew there was a greater cause that I was doing this for,” she said.

“I will definitely be doing it again for The Cows next year,” she added. “Hopefully I will be able to rope in a few more mad Cows to join me,” she added.

Amongst the many star performers in the colours of The Cows was Tracy Lee McKay who won her disabled category in a time of 34:01, with another Cow Elvira Wood coming fourth in the same group.

The Cows celebrate their tenth anniversary this year, and are aiming to raise R10 million for CHOC through major events and local fundraisers countrywide.

They were once again the top charity fundraiser at the recent 947 Cycle Challenge.