Winston Park couple Michelle and Oliver Sinclair were amongst the thousands who rode the recent Tsogo Sun Amashova cycle race, but they made a bold statement in the black and white cycling gear of The Cows as championed the CHOC Childhood Cancer Foundation that has become very close 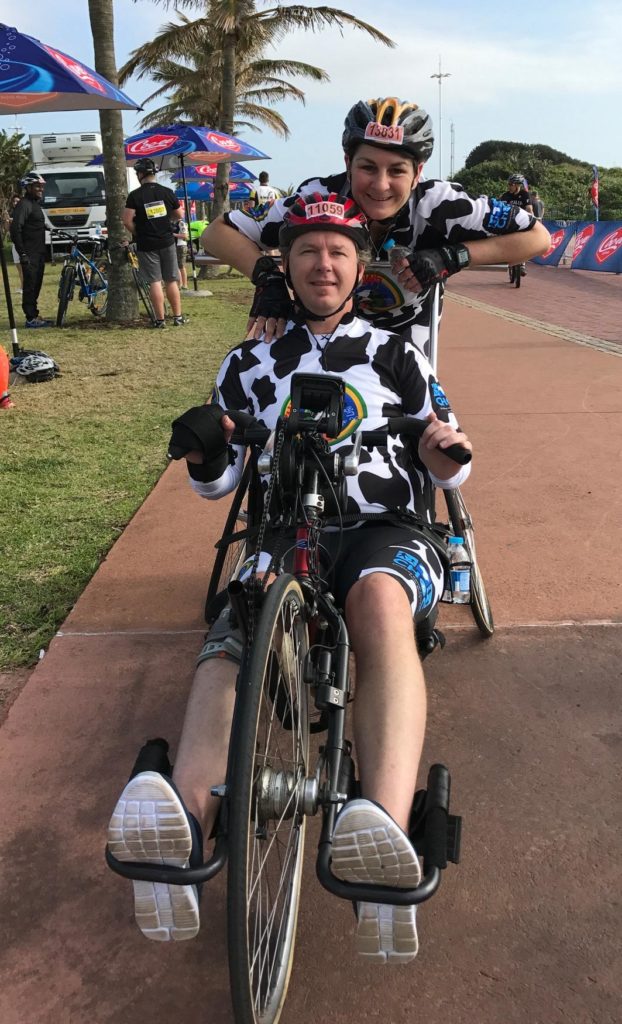 Oliver, or Ollie as he is known to those close to him, is a Multiple Sclerosis sufferer and rode in a specially modified hand cycle, with his wife Michelle on hand to help during the 35km race to Durban.

“Ollie has basically the left hand side of his body to use and his balance is not good, so he has ridden the Amashova in his hand cycle three times now. But this was the first time that we have done it for The Cows,” said Michelle Sinclair.

“While he was getting treatment in hospital Ollie was in the paediatric ward and saw first-hand what children go through when getting cancer treatment,” she added.

“To experience what a difference it makes to let kids have their families with them while they are getting cancer treatment really struck home, so we were proud to ride the Amashova for CHOC. It feels fantastic to be part of something that really makes a difference,” she said.

The hand cycle played into Ollie hands on the steep descents, but took a lot of extra effort to get up the hills, where Michelle used the bar on the back of the hand cycle to help push him to the summit of each hill.

“When you are cycling, the downhills are usually the time to rest, but not with Ollie,” said Michelle. “We were doing over 80km/h going down Fields Hills and I was pedalling like mad to try and keep up with him!”

The ride turned into a much tougher outing than they were expecting after a mishap close to the finish.

“We were actually doing really well and got to Tollgate in less than an hour, but then Ollie got a flat tyre, and with the very unusual tyres on his hand cycle, we couldn’t repair it.

“We agreed that we weren’t going to give up, having come this far, so he rode on the flat tyre all the way to the finish,” said Michelle.

She said that the support from fellow riders and spectators had kept them going.

“Wherever you go in The Cows kit, you get a special reaction. It is amazing and very humbling to be able to go out and raise awareness for CHOC at an event like the Amashova.

The Sinclair family have become stand-out supporters of The Cows. Their son Tyler got a special award from the Winston Park Primary School for raising R11 000 for CHOC through a passionate fundraiser that started with pooling all his pocket money.