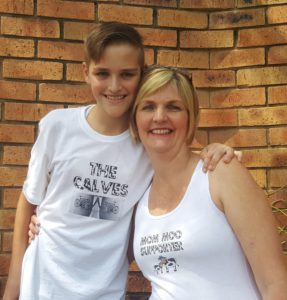 The gusty 13 year old pupil from St Benedicts is a keen member of Westville Cycling club, and takes on road races and mount bike events whenever he can.

He got his first taste of 100 Miles Of Nowhere last year when he stepped in to help out teams at the Westville Cadence Cycle Performance Centres.

This year he committed to raising the R1000 needed to secure a bike for annual fundraiser for a team of his friends calling themselves “The Calves”.

Starting with R250 from his pocket money, he rallied together family friends and colleagues, and together with local businesses, he managed to raise over R5000, including securing R3000 from local business Panel Rite Autobody Repairers.

He and his fellow team mates rode courageously and completed the 160 kilometres in an impressive time.

That Friday night was also the annual ROAG prize giving where Moolman was due to get the prize for finishing third sub-junior in the series. Not only did he miss that function to be able to ride the 100 Miles of Nowhere, but he also gave his cash prize to the CHOC fundraiser as well.

“Jayden has the right attitude to his cycling,” said his proud mother Janice Moolman. “He believes in having fun and believes in good sportsmanship always… on a good or bad day! He also wants to use his talent for charity.”

“Sometimes the real heroes of an event like this come from unexpected places,” said organiser of the KZN Herd of The Cows Iris Varty.

“The Calves are such a clear reminder of what we set out to do as The Cows. To have a lot of fun, yes, but more importantly to go that extra mile doing what we love to be able to make a difference to children battling cancer. Jayden was the hero of the day!”

More information can be found at www.100milesofnowhere.co.za