As The Cows work towards their lofty goal of raising R10 million for the CHOC Childhood Cancer Foundation in 2017 to celebrate their tenth anniversary, the latest cow to ‘The Herd’, Swazi fun-lover Nathi Simelane, decided to spend his 34th birthday running 70 kilometres across Swaziland to add his contribution to the snowballing fundraising effort.

Most of The Cows are avid sportsmen and women, but Simelani openly admits that taking on the challenge to run from his home to the Swaziland Ngwenya/Oshoek Border Post, and then down to Malandela’s Farm Restaurant & Pub was as much about trying to get back into shape as it was a fundraiser for CHOC. 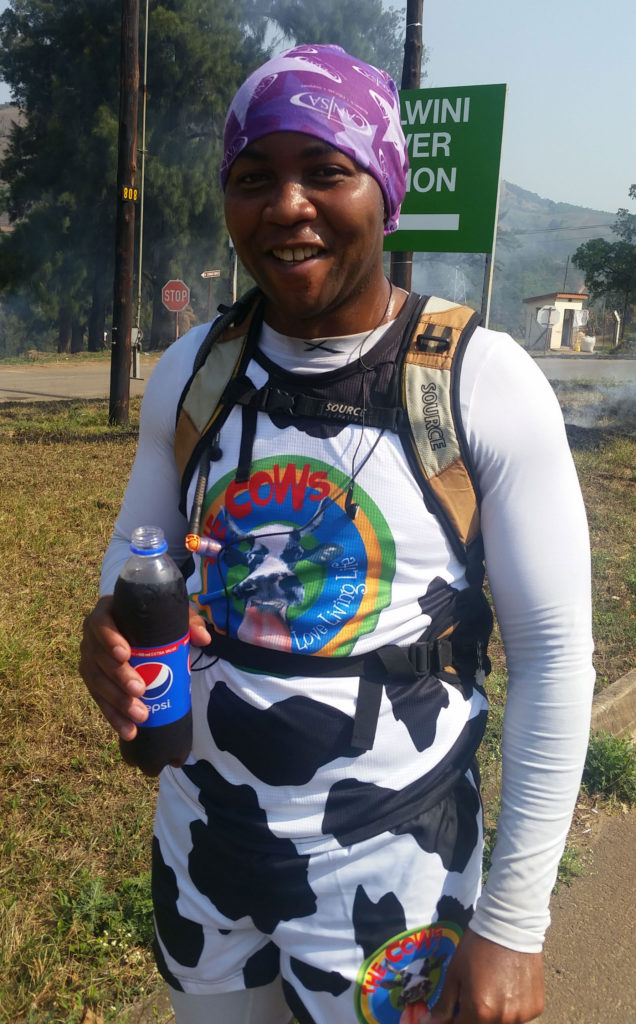 red two rather disturbing facts the other day,” said Simelane. “One – I can no longer see my toes when I look down, but that’s obviously because I’m getting old and my sight is going…or my feet are shrinking due to the same fact.

“Two – All my jeanpant are getting really tight around the waist. Obviously the wife buys that cheap washing powder, which shrinks everything….or she washes with cold water to save electricity,” he chirped.

“So, in order to regain my youth and fit comfortably into my pants, I’ve decided to embark on a small mission to help me accomplish this somewhat difficult feat,” he added.

Simelane first encountered the work done by The Cows on social media before making a personal connection.

“I saw The Cows online doing fundraising for CHOC, and then found out that my friend Lynne is part of the Herd…and the rest is history,” says Simelane.

“I have previously done two fundraisers here, for the Swazi Breast and Cervical Cancer Network and the New Hope Centre, and each fundraiser encompassed one leg of the route, so I decided to go big and combine them!” he added.

So with just his wife in support, he formally joined the Herd and was sent his black and white Cow running kit, while he started badgering all his contacts on social media to contribute towards his run.

On 16 September, with his wife supporting him, Simelane set off at midnight, and reached the end of his journey early in the afternoon.

“I attracted quite a lot of attention on the road and on Facebook…but then again, if you saw somebody running around dressed as a cow….” recalls Simelane.

“It got to 35 degrees at about 11 o’clock so as you can imagine, I was well impressed with life at that point.” he added.

He took to Facebook straight away after reaching the finish, exhorting his online friends to make a contribution. “Thank you guys! it was a long day out. Now you must pay. I don’t punish myself for nothing…c’mon….cough up!”

His friends responded, and helped make up the basic pledge take by any athlete keen to don The Cows gear for CHOC by raising at least R6000 for CHOC.

“It has been unbelievable to follow Nathi’s adventure from a distance,” said Daisy, the convener of The Cows. “Not only is he one of our newest members, but he looks to have sown the seed for a whole new Herd of The Cows in Swaziland.

“Nathi’s adventure really sums up the slogan of The Cows – “Love Living Life”, and we are really proud of what he achieved, and started for The Cows in Swaziland,” she added.