As entries 2017 GABRAN (Great Annual Bike Ride Across Natal) start to arrive at The Cows HQ Paddock, some of the stalwarts of the sport-mad charity fund raisers have gone the extra mile to raise money for the Childhood Cancer Foundation CHOC. 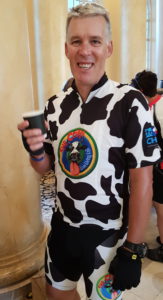 an based Wayne Campbell, a member of the Kings Park Cycling Club, is a GABRAN veteran, and committed to helping GABRAN contribute to the global goal of The Cows to raise R10 million in 2017 to commemorate the tenth year of their existence.

“I have done most of the GABRANs over the last five or six years, but this year unfortunately I will be missing it because I will be away overseas,” said Campbell.

He said that arranging to have the scrap metal sold to add to the GABRAN fundraiser was typical of the way that The Cows operate.

The GABRAN is such a special event, and I would definitely have dine it again if I had been around,” he explained.

“First of all, it is a ride and not a race. It is social in nature and a lot of fun.

“It is also a successful fundraiser, and getting involved with like minded people to raise money for CHOC, while riding through these beautiful places is really special.

“The fun and hospitality at places like the famous Escourt Bowling Club, all the breakfast stops, the pit-stop at the Bierfassl in Nottingham Road, together with the fun and games that are organised at the overnight stops, make it really memorable,” he added.

“It all starts the night before, because most people choose to stay at the ATKV at the start of the race, and the fun evening there tends to set the tone for the rest of the ride,” he said.

The race is open to any cycling enthusiast looking to enjoy the leisurely 283km ride from the foothills of the Drakensberg to the outskirts of Durban. Minors who are 14 years or older are welcome if accompanied by an adult.

While road bikes are the popular choice, many opt for tandems or mountain bikes, and the odd unicycle or mini cycle has also completed the fun event.

The first stage is a 100km ride from ATKV in Drakensville, followed by an 87km second stage to Howick, and finishes with a 94km closing stage to Hillcrest.